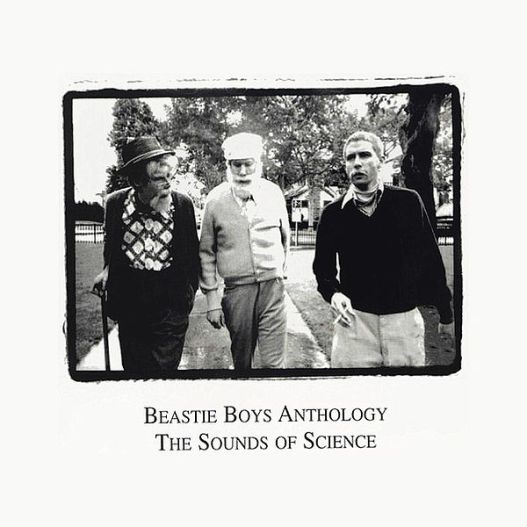 I have not seriously listened to the Beastie Boys in about 17 years. To me, they will always be a 7th grade thing, a paper route thing, a chillin’ with friends and playing Goldeneye thing. Even though they were quite popular among people my age – “Intergalactic” was such a perfect single for weird kids who were tired of N*Sync and the Spice Girls – I always had the sense that the Beasties were sort of a legacy act, whose career dated back to the early days of hip-hop. They seemed like the old guys in the room – little did I know they were only in their early 30s at the time. I remember the reception of Hello Nasty being divided between their new, younger fans (who seemed to love it), and those who’d been there from the beginning (who felt it was gimmicky and ended a streak of classic albums). The message was clear – you better find those old albums.

By the time Sounds of Science came out, I already had them all, and not a whole lot of spare cash. Didn’t matter. Dropping $26.99 on this thing was a foregone conclusion. I loved the new single and there was a lot of talk about *previously unreleased* material, which is incredibly enticing to a young fan who’s only in to like…two other bands. There was a neat retrospective booklet, plus commentary from the group on every tune. But the real selling point was the Fatboy Slim remix of “Body Movin” – I’d spent weeks taping the radio trying to capture that, recording 95.9 FM on one side of a cassette tape every day before school, then checking it when I got back (after watching TRL, since I was sure the video would sneak into the #10 spot one day). I eventually wound up getting about two minutes of it, as the tape ran out right in the middle of the second chorus. God, you kids will never know the struggle.

Anyway, Sounds of Science compiles 17 years worth of the Beasties, from their beginnings as crappy lo-fi punk rockers to their recent guise as socially conscious space rappers. Not like that was a natural evolution or anything. Luck played a major role; after the novelty single “Cookie Puss” took off, they started hiring DJs for their live shows, one of whom just so happened to be Def Jam co-founder Rick Rubin. They blew up into one of the biggest acts in the world, but then decided to leave for Capitol Records and hook up with the Dust Brothers, a controversial move that, in retrospect, probably wound up saving their career. If the Beasties were defined by anything, it’s that – a willingness to follow their muse and make whatever they felt like, regardless of commercial pressure or the wishes of their fanbase. They grew not only as artists, but as people, going from one of the crassest acts on the planet to champions of feminism in under a decade. Their sense of humor evolved from vulgar to clever to absurd. Musically, it was the same story. They picked up instruments and learned how to jam, which was a lot of fun even if they weren’t so great from a technical sense. They sampled from everywhere, exposing their fans to a wealth of great stuff in the process. They never repeated their successes, earning them a succession of hits which sounded nothing like one another.

All of that gets reflected on the anthology, almost to a fault; if anything, it’s almost too eclectic, too willing to pillage the group’s weirdest B-sides and off-brand diversions, often at the expense of fan-favorites like “No Sleep Till Brooklyn”, “Professor Booty”, “Flute Loop”, “Super Disco Breakin”, etc., etc. It doesn’t even include the song from which the compilation got its name (one of my favorites from Paul’s Boutique). Instead – two songs from the toss-off Country Mike album, three from the band’s kinda crummy “return to punk” EP Aglio e Olio, jokey B-sides like “Netty’s Girl” and “Boomin’ Granny” (which is exactly what you think it is), and Biz Markie hilariously failing to remember pretty much any of the lyrics to “Benny and the Jets”. One track, called “Live Wire”, sounds like Sifl & Olly meet The Residents. Even the album tracks tend to draw from the fringes – “Something’s Got to Give”, “Bodhisattva Vow”, and “Song for the Man” all attained “that one weird track” status. So it’s half a greatest hits album, half a dive into the group’s remarkable diversity, deliberately sequencing wildly contrasting tunes next to each other.

Personally, I was glad they went this route. I mean, a solid third of this was new to me at the time, and besides strict “best ofs” are boring anyway. Even if the quality tends to go all over the map, when you’re a diehard fan that sort of thing doesn’t matter too much. With the Beasties especially, since they tried so many different things, if nothing else you had to applaud the effort. Certainly they had their limitations but I think in some cases that worked to their advantage – if they needed a more technical rapper, they’d bring one in (“Get it Together”), and if they wanted a more complex instrumental bit, they’d just sample one directly. They were a bit rudimentary in their instrumental prowess, but that forced them to stick to simpler, catchier grooves and not rely so much on solos. They just knew a great bit when they heard one; just listen to that riff on “Sabotage”. Beavis and Butthead could’ve written that.

The Beastie Boys are one of those groups I overplayed so much in my youth that I don’t really have much need to hear them again. The 2009 remasters with bonus discs brought me back, as did MCA’s passing in 2012, which is still difficult to process. As for why I felt the need to whip this one out again, it really could have been anything, since there’s so much stuff out there that reminds me of them. Rod Carew, Boggle, Now n’ Laters, anything sampled on Paul’s Boutique, you name it. In this particular case though it was an encounter with an old friend who I’d known for many years; back in high school him and I used to be the closing crew at Burger King and every night we’d try to set the “all-time Intergalactic record” by playing the song consecutively as many times as possible. The manager usually hated it, but we were the ones doing the work, so what could they say really. And it got me thinking about how great and creative that single was, especially when you’re 12 and you see the video for the first time. It still sounds fresh today.

But the one I really wanted to hear again was “Alive”, the exclusive single released in support of the anthology. I thought it was a great tune, sort of a mix-up of new school and old school beats, with a nice shout out to Kurtis Blow in the chorus (not that I knew who that was at the time). I remember it being hinted that it was going to be their way of bowing out on top, and in a way it was. They stuck around of course, but their next release didn’t come until 2004, and I think everyone knew it was gonna be their George W. Bush album. I’m not gonna make a judgement on their post-Hello Nasty material just yet, since it’s kind of hard for me to evaluate it properly – these boys were the world to me when I was in middle school, but you move on. The stuff you loved at 13 occupies a very unique spot in your mind. When they came back, it was like…what are they trying to do here? What happened to MCA’s voice? In reality, I bet To the Five Buroughs is a perfectly fine record, and I bet it’ll be re-evaluated as a minor gem some day. But man, after six years, I just wanted more. 22 tracks, 75 minutes, with a bluegrass tune and some ska-punk and some real freaky instrumental shit. Because with the Beastie Boys, you really could have it all.