In a perfect world, Legion of Rock Stars would do a full takeover of some poor radio station on Halloween. I have no clue exactly how many songs L.R.S. have done as YouTube idiotically keeps pulling their damn videos, but I would guess they’ve done somewhere in the vicinity of 600, making them perhaps the most prolific cover band of all time.

FM radio has infected all of our lives; less now than ever with our iPods and fancy car stereos and Spotify, but still, who among us hasn’t driven a company vehicle or spent four hours in a supermarket? To that end I realize, it’s been a long ass time since we’ve heard anything truly new on the radio. I had a music teacher who pointed to “Take Me Out” by Franz Ferdinard and declared it “adventurous” by virtue of it’s single time change. I was born in 1986, so I’ve pretty much lived my whole damn life in an era of pop overproduction. You know how you’ll be watching a TV show or movie and think, “oh, those two characters are definitely hooking up” or “that’s definitely coming back later on” or “obviously, this dude is going to survive”; well, pop radio, for all its virtues, is much the same.  There aren’t a lot of surprises on the radio; the drummer always keeps suspiciously perfect time, the guitars are run through a zillion filters, and every vocal is the best of fifty takes.  It’s even worse now, what with auto-tune giving everyone perfect pitch and making them all sound the same.

Don’t you deserve better?  Legion of Rock Stars certainly think so.  Spending 1000 hours in the studio is not “rock n’ roll” and quite frankly what you hear blaring over the P.A. speaker has nothing to do with what the band can actually play.  For all we know these fuckers can’t even stand to be in the same room as each other!  Thus, Legion of Rock brings us Rock and Roll Reality.  You see, L.R.S. are deconstructionists (that’s a big word in art circles!) – instead of getting all coked up and relying on a producer or engineer to make them sound good, the Legion instead downs a case of Natty Lights (presumably), puts on a pair of heavy-duty noise-cancelling headphones and just plays the damn song.  In other words, what you hear is rock n’ roll as it truly is – unfiltered by production, rehearsals, or even the band’s own eardrums. 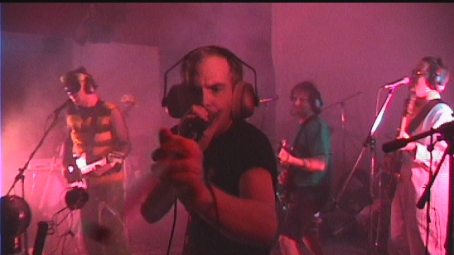 The band were kind enough to send a couple of CDs to my house.  In true L.R.S. fashion one jewel case was completely broken and the other had some grotesque artwork on it.  Also included were a couple of $1 bills (I never received any cash in my Van Halen CDs, and those guys are fuckin’ millionaires!).  Sadly the vending machine at work wouldn’t take them as the band signed ’em in silver marker.  I used another dollar bill and my Rold Golds got stuck.  I can’t buy a fucking break!  In total there were 41 songs, only a small fraction of the L.R.S. oeuvre, but regardless enough to warp my brain for a couple of hours.  You know how when you play an out of tune piano for long enough, your brain self-corrects the pitch and soon enough the tuning begins to sound normal?  Well, Legion of Rock Stars are kind of like that, except imagine that you had a stroke on top of it.

Funny thing is, I like these versions, usually more than the originals.  You can hear the B.T.O. version of “Takin’ Care of Business” a hundred times but after one listen to the L.R.S. version it won’t be the same.  Legion of Rock are full of unnatural rhythms and broken melodies, the kind that your own brain won’t allow you to produce naturally unless you were blocking your own noises out.  You ever hear a deaf person speak?  It also comes with the side effect of eliminating most of those inane lyrics that feel so meaningless in today’s world.  Considering that we live in a world that considers Trout Mask Replica to be a bona fide masterpiece I think it’s only right that L.R.S. are considered geniuses as well.  After all, the songs on TMR were weird to begin with; nearly everything Legion does sounds like a Trout Mask B-side despite the fact that most of their songs have roots in corporate rock.  Instead of beats on the 2 and the 4 you get beats on the two-and-a-half and the 3.9.  They invent brand new minor 13th chords like it’s nothing.  They make guitar solos sound incredibly difficult.

Consider the fact that anyone can write a pop song in ten minutes. If you were to actually record this song, it would probably sound boring and sterile, unless you happened to mess up something in the recording process or find yourself unable to fill in the blanks and wronk a major chord or something. These bits become the most important or interesting parts of the song; just ask Gary Numan, who wrote the main hook to “Are Friends Electric?” thanks to a bum note during a rehearsal. Well, the very nature of Legion of Rock Stars’ recording process ensures moments like this during every second of every song.

Anyway, the two CDs sent to my house were their first and their latest – the first, Rock and Roll Reality, is mostly beer-drinkin’ classic rock while their latest, So Horny, is a bit more eclectic mix. Look for both of these albums on your favorite BitTorrent site soon. So Horny just came out this year and as the title implies, it contains some horns (and synthesizers that are so out-of-tune that it feels like you’re being electrocuted). There are some modern tunes on this one, including Estelle and Kanye West’s “American Boy”, which I had never heard before, but that’s okay, since the members of Legion of Rock haven’t heard it either. This album had me cringing a lot more, as L.R.S. attempt to do a lot more female voices, and for some reason insert this boingy noise into nearly every song. There’s a Devo cover in there (“Girl U Want”), whose original rhythm was so ass-backwards that L.R.S. are actually able to reproduce it quite easily. It loses points for not including “Party Rock Anthem” (which they did do and it’s awesome) nor “Gangnam Style”; boy, L.R.S. really missed that bandwagon, didn’t they? Plus points for “Solsbury Hill”, which creates one of the most off-balance, fall-on-your-ass rhythms I’ve ever heard. Double plus for a take on “Dead or Alive” that completely obliterates the original; why yes, a robo-frog voicebox was exactly what this song needed. In fact, this album is full of frog sounds.

Anyway, perhaps no radio programmer will recognize the genius of Legion of Rock Stars, but that doesn’t mean you can’t have a little fun yourself. Step 1: Beg L.R.S. to release their MP3 archives online. If they won’t make that available, just rip them from YouTube. Step 2: Find a buddy with a sizeable music library, and one-by-one replace every song possible with the L.R.S. cover version. Step 3: Watch as your friend, now completely discombobulated, questions the world he or she thought they knew.  Step 4: Do the same to your own music library.